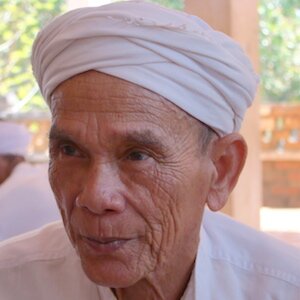 The title of Knour/Khnour is the Cham title for their leader, while the title of Uknha is bestowed by the King on a few special citizens who have helped to rebuild Cambodia. (Please note: there are many transliterations of the title Ukhna/Uknha/Oknha/ and various spellings of the name Kay Toam in the literature.)

– Cultural and religious leader of the 35,000 Imam Sann Cham people,
– District Council Member,
– President’s Council Member of the Cambodian Inter-religious Council (dedicated to encouraging people of different
religions to come together in solidarity and cooperation with the government, the U.N., and other nongovernmental organizations (NGOs) to bring about social development and social reconciliation and peace in Cambodia)
-Cultural sponsor and long-time, steady advocate of our Cambodian Village Scholar’s Fund’s activities in Sre Prey and beyond

His life under the Khmer Rouge:
In a 2004 interview with Isaac Tabor published in the Documentation Center of Cambodia’s Fourth Quarter 2004 newsletter, Searching For the Truth, Uknha Khnour Kay Toam revealed a bit of his history.  He recalled the dark years under the Khmer Rouge. Initially he could still practice his religion in secret on Friday nights, under a mosquito net where he could not be seen after the Khmer Rouge first came to his village in 1973.  In early 1974 he and his family fled to Kilometer 8, and then moved on to Tuol Kork and the Dubai mosque in Phnom Penh. When the Khmer Rouge evacuated the capital in April 1975, he spent a month trying to get back to his village, but the Khmer Rouge forced him to go to Kampong Cham instead. He and his family fled again, abandoning their possessions in another attempt to reach home. But before they reached home, his daughter and his mother-in-law died of illness and starvation. Later under the regime, Kai Tam worked in the rice fields, tapped palm trees, and worked in rope-making units. His son fell ill and died; Uknha heard that he had been buried alive.

Eventually he was moved to Andang Snai during a mass evacuation of the Chams, and there he was accused of being a hakim (leader of a Cham village) and of still practicing his religion. He was saved just shy of the killing fields on two occasions; once by explaining that he never ate beef (the Khmer Rouge considered this behavior suspect, but Uknha ate no red meat at all) and the second time by the Vietnamese when they invaded Cambodia in 1979.

The Uknha and other imams have taught the ancient and dying written Cham language and literature to interested youngsters and our program has helped by suppling classroom materials.  Please see his gracious testimonial letter regarding our organization’s work.