In 2010 two of the Cambodian Village Scholars Fund board members visited Sre Prey village and they were both completely overwhelmed by the English language skills of many of the older students.  Despite being in a grindingly poor town with no electricity other than car batteries, and no television or internet, these students had become fluent and readily conversant!  What’s more, we learned that the prior Fall, five recent high school graduates (from the handful who actually do finish high school and pass the national exams) had managed to borrow enough money to begin attending university 2 days per week as commuting students in Phnom Penh, 50 miles away (traveling by bus).  At last, one of the original dreams of the villagers had been fulfilled after 5 years!

The other observation that these visitors made was that the traditional Cham heritage appeared to be on the wane.  There were more shiny new mosques along the roadside, more veiled women, and much more obvious influence from external Islamic forces.  We reasoned that external money appeared to be buying influence and change.  So we wondered if on the other hand, whether education might not provide members of the traditional Cham communities with new tools, power, prestige, and skills for holding on to what was good about their own ways as well as their own cultural and linguistic heritage.

Consulting with our Cambodian advisors, we worked out a plan to select the most academically promising boy and girl from each graduating high school class, who without our financial help had NO possibility of attending university. Together we decided to jumpstart the program with a group of 4 students at university, studying FULL TIME in Phnom Penh.  The four students were chosen by the community in consultation with our English teacher, our Cambodian coordinator, village elders and the founders.  Two more students were added each Fall since then, using a process of English skills testing, need assessment, and interviews.

We made it clear to each student that they were being given this opportunity for a reason, and that reason was an investment, an investment in their community.  We stated clearly that it was our hope that they would use their educations for the good of their communities as a whole, not just for themselves or their own families.  The students are also to share in the cost of their education, shouldering one-third of the costs (repaying to start after a grace period), and that repayment of the loan would be necessary for the long-term continuation of this program within their community.  They have happily consented. 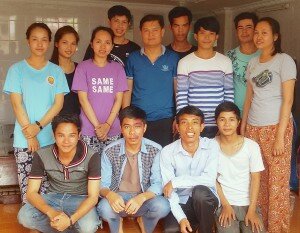 During the past five years the students have all demonstrated themselves to be remarkable young men and women and have all studied hard and done well in class, particularly as they did not have the benefit of a plush, expensive preparatory city education!  The group lives together, helping one another as a community, even though they attend 5 different university and study a wide range of fields from finance to public administration, to English to mathematics. 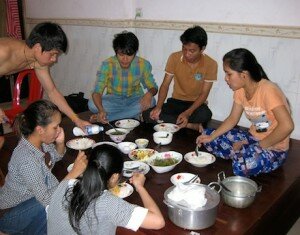 University Students Live and Eat Together