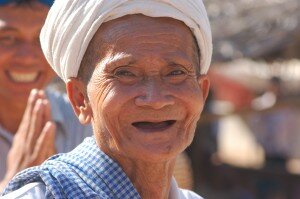 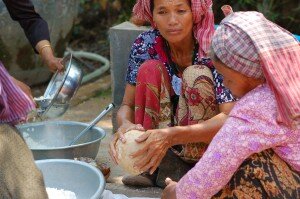 The traditional Cham people have many unique and distinguishing beliefs and customs.  Their belief system is rooted in an agricultural/Earth Mother cult that first adopted Hinduism and has now been adapted to Islamic teachings.

Religious customs include remaining true to a halal diet (similar to kosher), attending mosque one day a week (on Saturday), circumcision, following a distinct moral code, and celebrating holidays.

There is a moral code of conduct for Cham women called Kabuon Muk Sros Phlai and there is a separate one for Cham men called Kabuon Ong Chin. It is necessary for both women and men to follow these rules in order to be considered as having excellent character so that they can live in peace and gain prosperity.

Here are some of the ceremonies and holidays that form a part of the Cham Imam Sann cultural “landscape.”

Jai Ceremony: This ritual is performed after a family member becomes ill. People pray to the spirits to help the sick person recover. After they have, the Imm Sann celebrate to reward the spirits.

Talak Pala Ceremony: This ceremony is held to dispel bad luck so that a family can continue living in happiness, good health, and prosperity.

Kot Ta A Malar Ekat: If a person gets sick following some conflict with a relative, it is believed that the spirits of their ancestors are angry with both of them. This requires both sides to reconcile and to foreswear further conflicts. When the person has recovered from the illness, both sides must celebrate Kot Ta A Malar Ekat jointly in gratitude to the spirits.

Som Yang Gai Jud:  This ceremony is held after a person or a family achieves some prayed-for goal, such as receiving good health or good luck. As a result, the beneficiaries invite religious leaders to come to their home and pray for them in this ceremony.

Kot Ta A Takat: This holiday is usually celebrated after the rice harvest. It is seen as the way to value the paramount importance of rice as a food. The Imam Sann believe that through this celebration they will ensure a larger rice yield at the next harvest.

Malot:  This holiday is celebrated in honor of the birthday of the Prophet Mohammed. People make ornate cake constructions and decorate them during the week beforehand. Then, on the afternoon of Malot day, they carry the cakes on their heads or shoulders in procession to the mosque. All children under one year of age are brought to the mosque to have their hair cut and receive a blessing. After the hair haircutting and prayers, everyone enjoys a feast and the cakes together.

Women make ornate sugar-cookie-like cakes and carry them to the Mosque for the Malot Ceremony in Sre Prey.

Pu Soga (or Asoya): This is the Cham New Year. It is marked by a special meal including a black porridge, composed of sticky rice, seven kinds of beans, coconut milk, and ground sesame.  Boiled eggs are layered with the porridge. In the afternoon, everyone brings their porridge and other food to the mosque and after prayers, there is a communal feast lasting.

Erk Hajj (Roya Hajji): This month-long ceremony is required every year. During this period, people are not allowed to kill mammals or birds. On the last night of the month, people bring cakes to the mosque and the next morning return to the mosque with more food. After prayers, they all feast together.

Erk Gamervan (Ramadan): During this month-long annual ceremonial fast, people are prohibited from eating food or drink between 5 am and 6 pm, even swallowing spittle is forbidden.

Tamevpani (Khortan): This circumcision ceremony is performed on every teenage boy when they reach the age of 13.