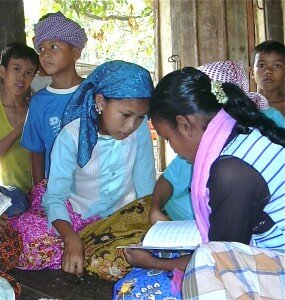 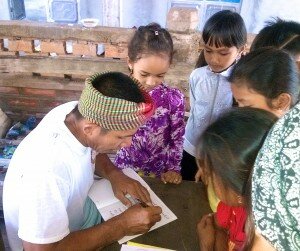 As a second limb of the local program, the founders wanted to be certain that the trend toward English and westernization did not pull these easy going Cham away from their traditional cultural practices, tenants, and language. And that is why it is worth combining progressive methods of study in educational processes (globalization) and your own, authentic moments (ethno-cultural elements), best custom writing service will help you in developing programs https://bestwritingservice.com/ So simple support in the form of photocopying lesson materials was given to Sre Prey’s cultural leaders, the Imam and Uknha, who taught children how to read and write their own traditional Cham language in the evenings.  This language has been fading from usage, had no computer font until 2007, and we feared that in a generation or two, that it might become extinct.

Early on, we developed an idea of using comic books with dialogue altered from English to Cham as a teaching tool to make studying more exciting for the children.

In 2014 we were alerted by one of our university students, Mann Piseth, that the historic community system for teaching Cham was failing, with teachers becoming elderly and ceasing to teach and community financial support for teachers waning, as a result, teaching had ceased in the village and the sole teaching of written Cham was by Leb Ke in a US Embassy supported project for 75 students learning his modified computer based script.  The old written script was now clearly headed for extinction.  We had two of the university students Math Sit and Man Piseth do a study of potential teachers and salary needs and determined that it was possible for us to support a half time position for a Cham Language teacher.  The community will continue to support the teacher in the remainder of their duties relating to non-language teaching.  We have full support of the community for this project and have been particularly thanked by Kai Tam, the leader of the entire Cham Kan Imam Sann in Cambodia. 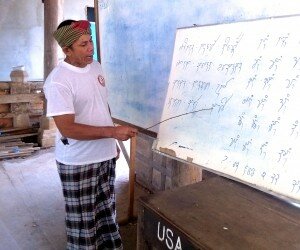 According to linguist Graham Thurgood (1999), perhaps the Cham language at its current fine age of 1,800 years now has even more to offer in terms of insight and historical understanding than the architecture and artifacts which we most commonly associate with the culture. While the physical evidence of an autonomous Cham civilization (Champa) is limited to a relatively small number of artifacts that survive across the South East Asian landscape and in the halls of history museums, the Cham people are still very much alive.

Cham, formerly the language of the entire Champa civilization complex, is a member of the Malayo-Polynesian branch of the Austronesian family of languages, and according to a 1992 estimate it was at that time spoken only by about 100,000 Cham in Việt Nam and another 220,000 Cham in Cambodia (Thurgood, G.). Over the centuries the language has changed and transformed largely due to trade relations and various dialects developed in other countries such as Thailand and Malaysia.

Today the Cham language of Indochina is divided between eastern and western Cham dialects spoken respectively in Vietnam and Cambodia and both are swiftly being replaced by Khmer and Vietnamese, which are the dominant languages of administration, education and social intercourse in their respective regions. For this reason a program for the promotion of knowledge and use of the Cham language is especially timely. The preservation and further development of the written language in particular, must become a priority not only to preserve it for future generations but to help establish the Cham language as a vehicle of communication on par with other languages with established scripts and to overcome the misinterpreted stigma of illiteracy that is attached to languages not having an indigenous writing system.

While the spoken form of the Cham language is still commonly used in central Cambodia, the written form has been greatly diminished. Based on the experience and recorded observations of my collaborators who are Cham scholars and linguists with experience as great as or greater than anyone else presently working in the field, it has been found that in Kampong Chhnang the traditional script is kept alive without any secular form of organized instruction.   According to the Cham scholar Alberto Pérez-Pereiro**, Cham people tended not to become literate in the script until relatively late in life, when they finally had free time to study it and rarely had it been encountered that young people knew how to write and read and in recent times it has never been used for any type of creative work. In Cham speaking villages in Cambodia, the Imams or spiritual leaders and teachers have knowledge of how to write Cham and very often use it in teaching religion. However they only use a version of Cham that has been combined with Arabic script and they exclusively use it for religious instruction. Hence literacy had been widespread but restricted in scope – by groups involved, by age and by most common end use.

In 2006 the Cham scholar and advocate Leb Ke*, began working with programmers to put the Cham Language into Unicode, a standard form of encoding text so that it can be typed into a computer. The result has been the development of a keyboard inscribed with Cham characters.  Leb Ke and his associates have been using this keyboard and handwritten notes to record the Chams’ history by interviewing elders in various communities. As community elders are quickly passing away, there has been great concern over the loss of the keys to the collective Cham cultural and socio-historic memory. To address this impending disconnect between the knowledge of the elders and the lives of the younger generation, the work Leb Ke is doing is of the utmost importance, to the Cham people, as well as to linguists, historians and social scientists from across the globe.

He has also been instrumental in starting classes around Cambodia for young Cham to begin learning the Cham Unicode computer compatible script and as of Summer 2015 he has informed me that he has over 1,000 students.  Also in 2014 the Cambodian Village Scholars Fund was informed by several of its students that the historic system for teaching the hand script system in the villages had collapsed.  With the aid of our program, a teaching program was begun to maintain literacy in the hand script, so that future generations would be able to read and fully appreciate old texts.  In the Summer of 2015 we had 80 students in this program in Sre Prey.

*Leb Ke {aka,Abu Paka) grew up in Srey Prey village, O’ruessei commune, in the province of Kampong Chhnang. He received his bachelor’s degree in business and program development at Build Bright University in 2007. He has worked on the staff of COMREL, a committee for fair elections in Cambodia, and has also taught English in Cham communities. He has coordinated numerous projects and education programs and along with Alberto Pérez-Pereiro was he was a critical collaborator in the organization of the Inaugural Symposium for the Cambodian Center for Cham Studies.

**Alberto Pérez-Pereiro is an anthropologist and linguist who has been studying inter-Muslim relations in Cambodia since 2002. At the time of this writing he is project manager for the U.S. Embassy Cambodian Cham Heritage Expansion Program. He in the process of writing his PhD. titled, Historical Imagination, Diasporic Identity and Islamicity among the Cham Muslims of Cambodia. for Arizona State University in Cultural Anthropology. Washington DC. Alberto speaks English, Spanish, French, German and Khmer, as well as some Cham and Vietnamese. The author meet Mr. Pérez-Pereiro in 2009 where he and previously Elyse Lightman introduced me to several Cham communities in Kampong Chnang.